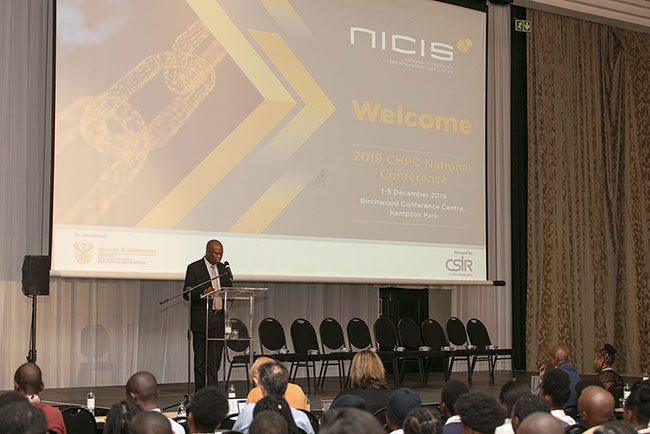 From 1 to 5 December 2019, about 700 delegates gathered at Birchwood Hotel in Johannesburg for the 13th Centre for High Performance Computing (CHPC) national conference. The supercomputing conference had representation from the international computing and research community, as well as a 50-strong delegation from the Southern African Development Community (SADC).

Government Chief Information Officer, from the Department of Public Service and Administration, Mr Mandla Ngcobo, welcomed the delegates and presented a talk on the digital transformation and surrounding issues in the public service. This was followed by keynote talks and workshops from captains of the high performance computing (HPC) industry across the globe, which took place throughout the week. These included talks from Prof. Michela Tauferfrom the University of Tennessee, USA; Prof. Thomas Sterlingfrom Indiana University, USA; Prof. John Gustafsonfrom National University of Singapore; Prof. Birali Runesha from University of Chicago and Dr Josva Kleist from NORDUnet.

The comprehensive programme included national and international contributions, as well as contributions from cyberinfrastructure system partners, the South African National Research Network (SANReN) and the Data Intensive Research Initiative of South Africa (DIRISA), who each conducted specialised tracks on their offering in the South African cyberinfrastructure trilogy. Speaking on the DIRISA track, Director: Dr Anwar Vahed said that topics on an artificial intelligence observatory and data intensive research systems for Astronomy and Bioinformatics demonstrated the importance of DIRISA’s research data commons in order to gain the greatest value from such shared resources. “Dr Dale Peters’ talk on the evolution of South Africa eResearch support services was a good exemplar for establishing these services at institutions” he said. The SANReN track included topics such as the assessment of the network and computer requirements of a typical Namibian university, the creation of a new South African cyber security degree and the use of the large data transfer services provided by SANReN. The talks also considered the direct and indirect benefits that connected institutions are gleaning from using SANReN, as well as their future services requirements from SANReN.

The SADC HPC Collaboration Forum formed part of the conference and converged to discuss the HPC framework and implementation plans for a regional HPC facility that would be used to find scientific solutions for common problems and other research in which member states could collaborate.

University students from South Africa and SADC battled it out at the conference exhibition floor. Over 120 of these students were split between the Student Cluster Competition, the Cybersecurity Challenge and the Student Datathon Challenge. Prizes included submissions into international rounds with international trips, laptop computers and notebooks, noise-cancelling earphones and even cash.

Department of Science and Innovation (DSI) Chief Director for Basic Sciences and Infrastructure, Dr Daniel Adams, commended the National Integrated Cyberinfrastructure System (NICIS) for its efforts in equipping university students with skills and building a pipeline. “Interventions exposing our students and researchers to high-quality conferences like this one, the competitions that provide platforms and opportunities to stimulate the pipeline and grow the pool of postgraduate students are definitely steps in the right direction. The DSI remains committed to support these efforts,” he said.

In the Student Cluster Competition (SCC), 10 teams of students from 10 universities battling it out to build small high performance computing clusters on the exhibition floor – using hardware provided by the CHPC and its industrial partners –raced to demonstrate the best performance across a series of benchmarks and applications they were given. The first prize was taken by a team of six students from the Universities of Witwatersrand (Wits) and Western Cape (UWC). Two reserves from the Universities of Western Cape and KwaZulu-Natal were also chosen, in case one or two from the wining team cannot make the international round. The members of the winning team are Guy Axelrod, Victoria Bench, Michael Beukman, Sivenathi Madlokazi, Alungile Tshangela and Mikhail Vink. The two reserves are Stephanie Agenbag and Kalreen Govender. This team will represent South Africa at the International Supercomputing Conference in Frankfurt, Germany, in June 2020. The main sponsor of the competition was DellEMC, who sponsored the lease on computing equipment worth about three-million rand as well as a training trip to the Texas Advanced Computing Center in Texas, USA and the travel to the international competition in Frankfurt, Germany. This competition also had a wide range of prizes for the different categories, prizes ranged from super laptops, iPads, headphones, backpacks, etc., courtesy of Eclipse Holdings, Intel, Altair, Bright Computing, Mellanox and Microsoft Azure.

In the third annual Cybersecurity Challenge, organised by SANReN, nine teams from South African universities and three from universities in SADC competed for the top prize. The University of Pretoria, Computer Science Department, represented by a team of three students, namely Jared O’Reilly, Savvas Panagiotou and Tristan Sander-Hug, took first place. The challenge seeks to stimulate interest in cybersecurity and specifically the field of network security within South African tertiary institutions and is aimed at university students who are interested in information security fields. Among the prizes were JetBot Robot kits, Pi Computers and drones, generously sponsored by F-Secure, Microsoft and Cyanre. SANReN is currently making plans to enter the winning team into the international competition, which will take place later this year in Russia.

New on the programme was the DIRISA Datathon Challenge, designed for students to showcase how open research data can be used to come up with creative and innovative solutions to some of the country’s problems. The four-member winning team was Jean Boguo, Alex Dateling, Kayleigh Slogrove and Ruan Spijkerman from the University of Johannesburg. Each of the teams had to find a real South African problem and find available open data to solve the identified problem. The winning team focused on mental health issues and used various data sources (South African Census Data and the American mental health illness database), data visualisation and machine learning algorithms to help create awareness of mental illness in the country. This project grabbed the attention of the DSI; as a result, the team will be put in an incubation programme where they will have an opportunity to develop their solution even further. The Datathon Challenge had prizes ranging from cellphones, tablets, noise-cancelling earphones and wireless Bluetooth speakers sponsored by Redhat and Altron bytes.

NICIS Centre Manager, Dr Happy Sithole, was impressed by the amount of effort that the students put into the competitions. “The Student Cluster Competition and Cybersecurity Challenge remain important efforts in addressing the skills shortage in cyberinfrastructure, and the Datathon Challenge that was introduced this year brings the element of effectively harnessing cyberinfrastructure by using data manipulation techniques to solve societal challenges,” he said.

Two Student Cluster Competition participants walked away with R65 000 each courtesy of Intel. The award was given based on their technical contribution to the team, their academic performance, as well as teamwork. The winners were Sivenathi Madlokazi and Alungile Tshangela, both from the University of the Witwatersrand.

More than 50 Master’s and Doctoral students from 13 South African Universities showcased their research posters on HPC research on the conference floor. All the students used CHPC Lengau supercomputer to obtain their results. They presented work in areas such Bioinformatics and Biological Science, Computational Chemistry, Computational Physics and Material Science, HPC technology, Earth System modelling, cognitive computing and machine learning. “Most of this computationally intensive research could have been impossible without the existence of HPC in South Africa,” said CHPC’s Senior Research Scientist and Competition organiser, Dr Daniel Moeketsi.

The posters were evaluated by an independent team of local and international adjudicators who have extensive experience in HPC applications in different fields of science and engineering. The posters were judged on the quality, the HPC content and quality of research, their ability to communicate the science content and the general impression of the presentation. The overall first place winner of the Masters-category poster, Lenard Carrol, from University of Cape Town walked away with R5 000 and the Doctoral-level overall poster winner, Beauty Shibiri, from University of Limpopo walked away with R7 000.The poster prizes, to the amount of R25 000, were generously sponsored by Qfinsoft and Gaussian Inc.

About 40 grade 10 and 11 mathematics and science learners attended the CHPC workshop where they were taught how to code using Scratch Software. The learners were selected from three schools, namely Tsako Thabo and Lethlabile Secondary schools from Mamelodi and Bokamoso and Thuto ke Maatla Secondary schools from Tembisa. They learned how to create interactive animations and educational games, while getting a crash course on how computers operate. “Coding is an essential skill required for the future workforce for the fourth industrial revolution,” said Dr Daniel Moeketsi.

Early in the planning phase of the competition, a call is made to potential sponsors who assist NICIS to cover the cost of student travel and accommodation, as well as the travel and accommodation of HPC captains of industry across the world who have continuously added to the stature and international status of the conference. In return, the sponsors exhibit at the conference and receive access to almost 700 delegates from difference sectors of the computing and research industry. They use the platform to showcase their solutions and offerings. The conference received about R2 million in sponsorship from Diamond Sponsor: Intel; Platinum Sponsors: Altair, Boston, AMD, DELLEMC and Hewlett Packard Enterprise; and Gold Sponsors: Schrödinger and Mellanox.

Pictures can be found here: https://chpcconf.co.za/2019-gallery